In the early part of the 19th century, the Niagara River was considered one of the most degraded places in North America. The advent of hydroelectric power harnessed from Niagara Falls led to the proliferation of chemical industries along the river. By the 1970s, there were approximately 700 chemical plants, steel mills, oil refineries and other industries discharging over 950 million litres of wastewater into the Niagara River each day. As pollution levels increased and gained notoriety through well-publicized health disasters such as Love Canal, pressure mounted from citizens, environmentalists, and politicians to proactively address the severe degradation of the Niagara River.

In response to environmental degradation around the Great Lakes basin, the Governments of Canada and the United States signed the Canada-U.S. Great Lakes Water Quality Agreement (GLWQA) in 1972. The GLWQA commits both countries to work cooperatively to “restore and maintain the chemical, physical, and biological integrity of the Great Lakes System”. During the same period, Canada and Ontario committed to fulfilling Canada’s obligations under the GLWQA through the Canada-Ontario Agreeement (COA): Respecting the Great Lakes Ecosystem. The COA was most recently updated in 2014.

The GLWQA calls for localized, concentrated efforts to restore 43 degraded locations (called Areas of Concern or AOCs) through the development of cleanup plans (or Remedial Action Plans, RAPs) (Figure 1). The Niagara River is one of 36 remaining AOCs in the Great Lakes basin.

An individualized RAP is required for each AOC. The ultimate goal of the RAP is to identify and complete restoration actions in order to remove an AOC from this list. The process of removing an AOC from the list is called ‘delisting’. Delisting occurs when all locally-defined actions are completed and the Governments in both countries agree that scientific evidence shows the location is no worse than other Great Lakes locations and that there is local, public support in favour of delisting. 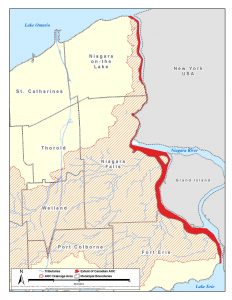 Figure 2. A map of the Niagara River (Ontario) Area of Concern and a portion of its drainage area.

The Niagara River AOC is the river itself extending from Lake Erie to Lake Ontario (Figure 2). The drainage area that flows into the river is referred to as the AOC watershed. Restoration efforts are focused on the river itself but some projects are implemented in the AOC watershed, if needed. Although the Niagara River is identified as a bi-national AOC, there are separate RAP processes on both sides of the border. Click here to learn about what’s being done on the U.S. side of the River.

In Ontario, the responsibilities for RAP progress and AOC remediation are shared by the federal and provincial governments through the Canada-Ontario Agreement Respecting the Great Lakes Basin Ecosystem, or COA.  The administration and implementation of a RAP, however, includes a variety of departments at all levels of government, non-governmental organizations, academia, business and industry, and the public.  A local RAP team representing those various stakeholders tracks environmental conditions, activities, and outcomes relevant to the RAP.

How do we track progress?

The Niagara River offers several ecological, recreational and economic beneficial water uses. It’s a source of drinking water, power generation, tourism, recreation, and supports over 1200 species (see Niagara River Ecology). When something interferes with the enjoyment of a water use, it’s called a beneficial use impairment or BUI. There are 14 potential BUIs identified in the GLWQA (common to all AOCs) that the RAP Team uses to focus restoration needs, track progress and report on success.

When taken together, the status of all of the BUIs tell us the overall condition of the Niagara River AOC. For the Ontario side of the AOC, there are currently 5 BUIs that are deemed impaired and 9 that are not impaired. Learn more and track our progress here.

The goal is to complete actions that will restore the beneficial water uses. Once the required actions are complete for an individual BUI, it is assessed against locally-defined goals. If it meets the criteria then the RAP initiates a re-designation process by which the status of the BUI can be changed (i.e., from impaired to not impaired). The designation of AOC (or AOC in Recovery, if appropriate) can be removed (i.e., delisted) when all actions are completed and environmental monitoring confirms that beneficial uses have been restored in accordance with the locally-established RAP criteria.