Over the past 150 years, human activities have impacted the Niagara River ecosystem. Early pollution problems were caused by sewage, bacteria, oil and other industrial chemicals. Actions such as regulatory changes restricting pollution discharges, improvements to wastewater treatment, and cleanup of contaminated sites have contributed to addressing pollution problems and reducing toxic substances in the river.

Together, the Declaration of Intent and its work plan make up the Niagara River Toxics Management Plan (NRTMP) to reduce the amount of toxic chemicals discharged to the Niagara River through cooperative and independent agency activities.  The NRTMP outlines a series of actions to be undertaken by the Four Parties, including:

On December 3, 1996, the Four Parties signed a Letter of Support to re-affirm their commitment to the NRTMP. The revised objective (as stated in the Letter) is “to reduce toxic chemical concentrations in the River by reducing inputs from sources along the river, with the purpose of achieving ambient water quality that will protect human health, aquatic life, and wildlife, and while doing so, improve and protect water quality in Lake Ontario as well.”

The updated Plan of Action in the 1996 Letter of Support included:

Priority Toxics for the Niagara River 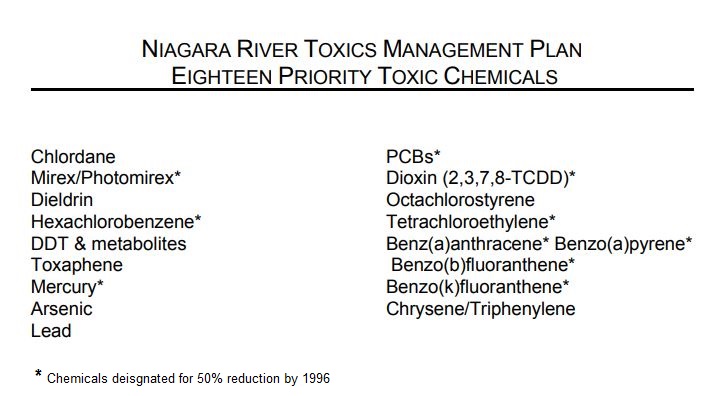 Overall, the water quality of the Niagara river has improved significantly since the inception of the NRTMP in 1987. Based on a review of the most current trend information, the original goal of 50% reduction in the concentration of 10 of the 18 priority toxics either has been met or exceeded for all except PCBs, p,p’-DDE and the particulate phase PAHs. Despite this success, more work is underway to further reduce those compounds.

There are three components to monitoring identified in the 1996 Letter of Support: water quality, biomonitoring, and source trackdown. 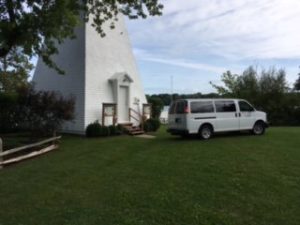 Through the Upstream-Downstream Program conducted by Environment Canada since 1986, ambient water quality information is collected at Fort Erie and at Niagara–on-the-Lake to determine which chemicals are originating upstream (i.e., Lake Erie and above) versus those being discharged from sources within the Niagara River watershed (Fig. 2).

Due to the complex nature of this dynamic river system, identifying specific chemical concentrations is extremely challenging. Statistical results (90% confidence intervals) are compared against the strictest criteria amongst the Four Parties to determine relative progress over time. 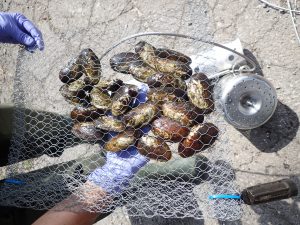 Since 1983, MECP researchers have examined the concentrations of contaminants in caged mussels, and special sampling devices to measure a variety of toxic chemicals in that can accumulate in living organisms in the Niagara River (Fig. 3).

Young-of-the-year fish are collected by the NYSDEC and the MECP to monitor persistent organic contaminants in the Great Lakes Basin dating back into the 1970s. This information helps find localized problems, determine contaminant trends over time, and are useful to determine the success of cleanup efforts for hazardous waste sites.

One of the commitments in the 1996 Letter of Support was to track-down new sources of pollution to control. Sediment investigations by ECCC (in Canada) and NYSDEC/USEPA (in the United States) focus on tributaries that drain into the Niagara River on both sides of the river. Due to differences in sediment criteria between each country, results are compared to the agency’s own relevant criteria. Results from the sediment studies are combined with water quality and biomonitoring, using a weight-of-evidence approach, to prioritize additional track-down efforts.

A 2007 NRTMP Progress Report indicates that a 50% reduction or more for those 10 priority toxics was met or exceeded. Some were reduced by more than 75%.

Actions to significantly reduce or eliminate all original point and non-point sources have occurred and continue to be implemented as facilities/site are identified by the Four Parties.

Actions by NYSDEC and USEPA to cleanup hazardous waste sites have reduced potential inputs to the river by approx. 94% since 1989.

How does the NRTMP differ from the Remedial Action Plan?

The NRTMP is separate from the Niagara River Remedial Action Plan (RAP) which takes a much broader ecosystem approach to improving the Niagara River. However, the NRTMP is a source of important, technical data for the RAP which has been used to assist in assessing the status of Beneficial Use Impairments.

Reports related to the work under the NRTMP can be found in our Document Library, simply type NRTMP in the search bar.

You can also find past reports on the U.S. EPA website here.